The “Baltic Way”, the “Baltic Chain” and other names

The historical human chain that Estonians call “Balti kett”, or the “Baltic Chain”, is known to our neighbours in the south and in most languages of the world as the “Baltic Way”. As far as we know, the idea of a human chain was first committed to paper during a meeting of the popular political fronts of the Baltic States held on 15 July 1989 in Pärnu, and was, even in Estonian, already called the “Baltic Way”. Clearly, there is a strong and direct connection with the political speech “Balti tee” (“The Baltic Way”) given by the Estonian politician Mati Hint two months earlier, which was quickly published in multiple languages and received a huge response. In his speech, Mati Hint stressed the historical and cultural difference of Estonia, Latvia and Lithuania from the rest of the Soviet Union and the desire of the people for greater freedom. The speech suggested that the three Baltic Soviet republics, which were far ahead of the others in their efforts towards independence, should be given greater freedom under either some special programme or a special agreement with the Kremlin. Using the same title to name the human chain as a political action was a possible way of adding weight to the idea.

Nevertheless, it was the phrase “Baltic Chain” that quickly caught on as the Estonian name for the action. Perhaps it felt somehow simpler and natural to say out loud. Initially, the image of a chain was disagreeable for many, probably bringing to mind negative images (yoke, serfdom, oppression). So, in its preparatory stages the action was also titled the “MRP Chain” or by introducing positive additions to the name: the “‘Baltic Way’ Solidarity Chain”, the “Baltic Chain of Unity”, the “Baltic Chain of Friendship” etc. The simple “Baltic Chain” as the most apt quickly prevailed. 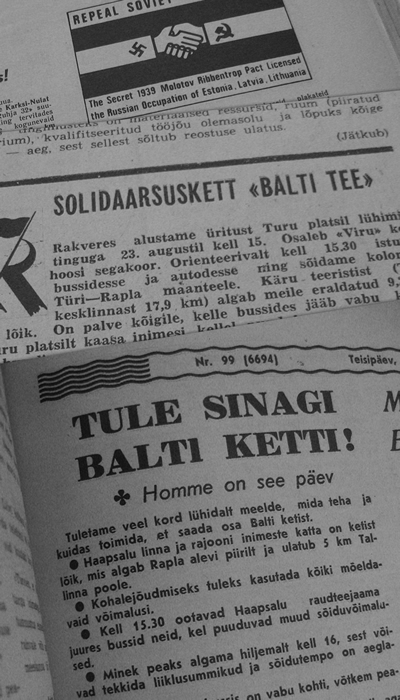