The organising of the Baltic Way

The responsibility for organising the Baltic Way in Estonia would fall mainly on the Popular Front. This political mass movement had been created in 1988, formally with the aim of supporting perestroika, or the reforms carried out in the Soviet Union, but it quickly moved towards demanding greater autonomy, and subsequently independence, for Estonia. An important contribution in terms of explaining the event to and promoting it among the public was made by the Estonian Heritage Society. The question of who first came up with the idea of a human chain connecting the three countries has been a matter of dispute, but the idea is mostly attributed to Edgar Savisaar, a leading figure in the Popular Front.

Having developed a general conception and reaching an agreement with the Baltic neighbours regarding the realisation of the idea, concrete actions had to be taken. Between Tallinn and Vilnius, a route was laid down for the chain, which was to run 211 kilometre inside Estonia, passing through the cities of Rapla, Türi and Viljandi. According to a preliminary plan, the chain was to go through Pärnu and Ikla, but it was decided to move the route towards central Estonia in order to make it easier for the participants to be transported to their positions. Next, the route was divided into areas of responsibility between the city and district organisations of the Popular Front, which were responsible for informing and engaging people to cover their respective sections. Registration of participants in the chain began in order to book the necessary public transport. As it was uncertain at the outset how the people would react with another mass event, a modest minimum scenario was set down: the distance between the participants in the chain was to be no more than 10 metres. The plan was to fill the gaps between people with black ribbons.

It was agreed that the human chain would be formed to the right of the road leading from Tallinn, facing east. The vehicles were to be parked on the right-hand side of the road, behind the people standing in the chain. As large traffic jams were expected, the recommended time of arrival in the designated sections was 6:30 pm, so that the organisers would have at least half an hour to line up the chain. It was recommended that the vehicles heading to the Baltic Way have a sign with the letters “MRP” or the logo of the Popular Front attached to the windscreen to help the traffic controllers. People were advised to take along radio sets, umbrellas and packs of sandwiches, as well as topical slogans and national flags. Before and after the chain, thematic meetings and rallies were held in many different places. As the people arriving from more remote areas had to start driving early, in various places 23 August (a Wednesday) was prudently declared a non-working day, with people putting in the necessary working hours either on the Saturday before or the one after the event.

The high point of the day was the joining of the chain – people holding hands for half an hour from 7 to 7:30pm. Drivers on the road were asked to stop for that time if possible. During the half hour there were speeches given from the Pikk Hermann tower in Tallinn and a keyword was passed on along the chain. The keyword, which was not revealed before the live radio broadcast, was to be simultaneously passed down the line from both ends of the chain, Tallinn and Vilnius. By about 7:30 pm it became clear that the secret keyword was very topical and lived up to the hopes of the people: “Freedom!” 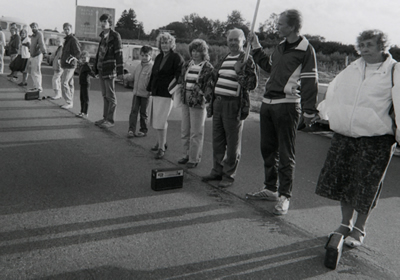 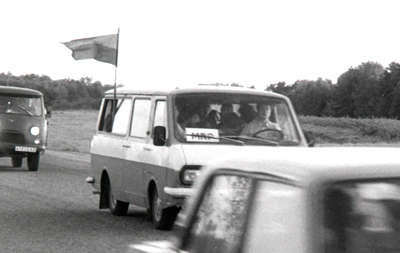 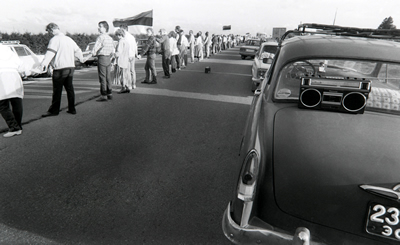 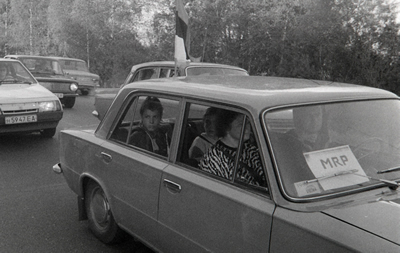