The Baltic Way was a truly gigantic political event, which was carried out with amazing speed. After the Baltic popular fronts’ decision to form a human chain, it took less than a month and a half for it to become a reality. As always with planning large events, alongside the plans that were ultimately put into action, a number of other ideas were on the table. From these, the more promising ones had to be chosen and carried out. In addition to the plan to connect Tallinn and Vilnius with a human chain, which was ultimately implemented, the organisers are supposed to have discussed the idea of using human chains to form one letter in each country: “M”, “R” and “P” or “S”, “H” and “P” (for the Stalin-Hitler Pact as the secret deal is often called in the West). The idea of surrounding the Soviet military bases in the Baltics with a human chain was also discussed. The strength of the idea of a chain connecting the three countries, however, lay in the fact it would directly bind the people of the Baltics together.

During the preparation work, changes were also made to the plans for the Tallinn-Vilnius human chain before finally carrying them out. While initially the chain was to go through Pärnu and Ikla, the route was moved further towards central Estonia in order to make it easier for the participants to be transported to the location. (The change was agreed on in early August when preparations for the chain had already been under way for a couple of weeks. For example, the logo had already been designed, which is why, as a humorous curiosity, on many posters for and objects related to the event the route can still be seen passing through Pärnu.) The emphasis of the action also changed with time. While at first the organisers (particularly the Heritage Society, inspired by the Black Ribbon Day commemorated in the West) had emphasised the 23rd of August as a day of mourning, calling on people to light candles and hoist flags with black ribbons as a sign of mourning, soon the emphasis shifted towards a day of protest. Although historical injustice was recalled and those unlawfully repressed were commemorated, 23 August 1989 became a day when the main focus leaned towards political protest to pressurise the Kremlin. 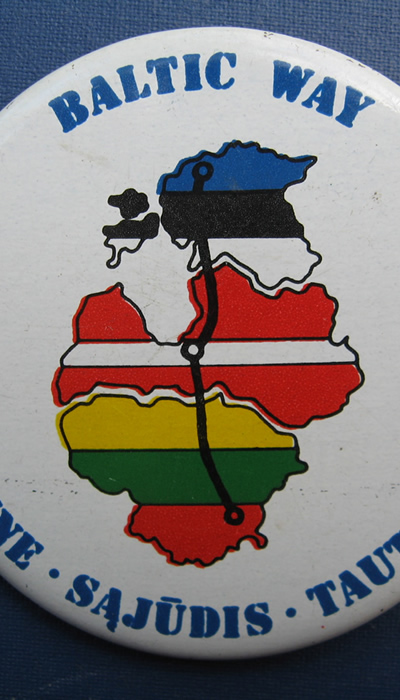