Demonstrations in Estonia on the day of the Baltic Way

As well as forming a human chain hundreds of kilometres long and joining hundreds of thousands of people, many other, smaller political demonstrations were held in Estonia on 23 August 1989. In the afternoon, a number of thematic public meetings with speeches were held in several cities. Meeting are known to have taken place in Jõhvi, Karksi-Nuia, Kohila, Kuressaare, Pärnu, Rakvere, Rapla, Tartu, Viljandi, Võhma and Võru. In places further away from the chain, convoys headed out to the chain formation points straight after the meetings. In Tallinn, a large press conference was held in the White Hall of the national radio building, where several hundred journalists, many of them from the West, were present to interview Estonian popular leaders. Of great symbolic significance was a large public meeting in Hirvepark, where just two years earlier the publication of the MRP secret protocols had been openly demanded for the first time in occupied Estonia. In addition to speeches, patriotic songs were performed and a collective prayer was held at the Hirvepark mass meeting with an estimated 4,000 people attending, according to journalists. Out of the half-dozen known monuments in Estonia related to the Baltic Way, two (in Käru and Särevere) were opened on 23 August 1989, a few hours before the chain was formed.

Once the chain had dispersed and the people were no longer holding hands after 7:30 pm, they could end the day by attending one of the mass meetings resembling a public celebration, three of which were held across Estonia. Those who had stood in the chain in the north moved to the meetings in Rapla and Türi, which started at 8:30 pm. The largest popular gathering, however, took place on the Estonian-Latvian border between Nuia and Rūjiena, where a meeting titled “Kurjuse hävitamine” (“Destruction of Evil”) began at 9:15 pm. Among the representatives of Estonia and Latvia, the leader of the Estonian Popular Front Edgar Savisaar and the émigré Estonian political scientist Rein Taagepera spoke. After the speeches, a symbolic gallows with slogans bearing the symbols of totalitarian regimes hanging from it were lit in a great bonfire. The open grassland that served as the venue for the event was packed with people. Different estimates of the number of people attending the meeting on the border range from 20,000 to 30,000. Spontaneous candle lighting and collective singing events were held in many smaller places across Estonia as the participants returned home. 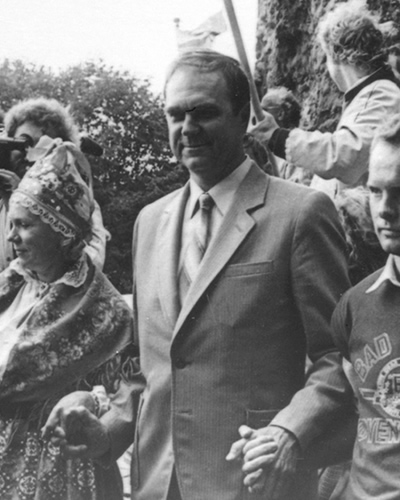 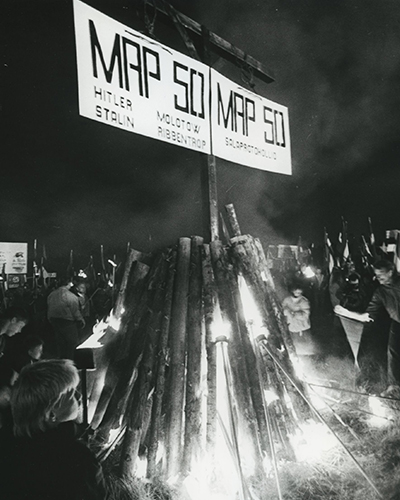