The question of the number of participants in the Baltic Way

The organisers of the Baltic Way had taken on a very ambitious task and were aware of that. Announcing a human chain joining the Baltics in the name of a shared idea without the masses bothering to appear might have discredited the organisers and in fact the whole independence movement in all three countries. Since the participation of masses of people in any kind of event can never be predicted with complete certainty, it was a daring venture. As a precautionary measure, a plan to distribute people sparsely, joining them with black ribbons, which they would hold, was in place in case of low participation. However, this was just a backup plan, as the aim was still to involve as many people as possible and form a continuous human chain.

The section of the Baltic Way assigned to Estonia was roughly 210 km long. The organisers estimated that a person with arms spread out would cover about 1.5 metres, which meant that it would take about 140,000 people to cover the entire length of the Estonian section with a human chain.

How many people gathered in reality? That is almost impossible to estimate in retrospect. In the bustle of traffic jams and the general disarray of the movement of the masses of people on the day of the protest, the task of determining the number of people joined in a chain turned out to be impossible. This was attempted with regard to some sections of the chain, but most of these attempts have been fairly general estimates, which cannot be relied on with much certainty. At the end of 1989, Andrus Öövel, one of the main organisers of the chain and therefore presumably among those best informed about the matter, estimated the number of Estonian participants at 200,000. The estimated total number of people who stood in the Baltic Way – 2 million – originates from Western media. This estimate was already doing the rounds on the same day, 23 August 1989, and very quickly prevailed.

Küllo Arjakas, who among Estonian historians has studied the topic in greater depth, estimates the number of participants in Estonia at about 200,000 and the total size of the chain to have been approximately a million people. Taking into account the length of the route and the extent to which it was manned, including some under- and overpopulated stretches, this may be considered an adequate estimation. 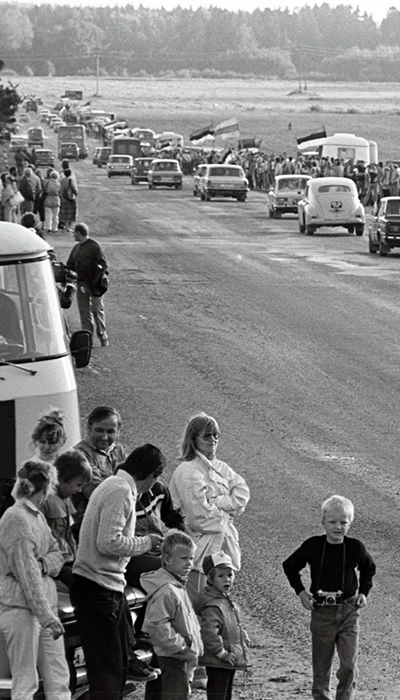