The question of the continuity of the chain

The organisers of the Baltic Way were faced with a difficult task as public participation in mass events is never exactly predictable. A lack of participation in an effort that was supposed to show to the world the Baltic States shared aspirations for independence could have discredited both the organisers and the entire freedom movement. As a backup plan in case of limited participation, the organisers considered distributing people sparsely (at intervals of up to 10 metres) and joining them with black ribbons. However, the formation of a continuous human chain was still the aim, which in Estonia required the participation of an estimated 140,000 people.

One of the main organisers of the chain, Andrus Öövel, estimated the number of Estonian participants at 200,000, which exceeded the amount required for a continuous chain by more than 40 per cent. Many newspaper reports and reports from different sections of the chain estimate the number of participants to have been larger than expected. In some places in Tallinn people were standing in multiple lines; at the beginning of the chain at the foot of the Pikk Hermann tower in the garden of the castle of Toompea, as many as tens of thousands of people were estimated to have been standing hand in hand. There are, however, a few reports of small gaps in the chain. A bigger problem was the fact that the convoy from north-eastern Estonia (thousands of people from the counties of Lääne-Virumaa and Ida-Virumaa) got stuck outside Paide, with just a couple of dozen kilometres separating them from their destination. Due to the huge traffic jam in central Estonia, which lasted a couple of hours, many did not make it to their places in the chain, but with determination could still make it to the after-meeting that started in Türi at 8:30 pm. Reports about people not making it to their assigned positions in the chain also came from elsewhere. So, in many place people, wherever they happened to be at 7 o’clock, formed their own little chains and followed the events on the radio.

People’s indignation at the unprecedentedly large traffic jams, which left many without a chance to directly take part in the great event, was perhaps most cordially addressed by the journalist Jüri Peinar:

Let us praise the organisers and not condemn them for what they were not able to foresee. I understand why those people, especially the elderly, for whom such a venture was perhaps the first and last in their lifetime, were offended because of not reaching their positions. But, dear people, you were there, you expressed your will and desire to see an independent and free Estonia of the future… It is possible that someone else was standing in your place or that the gap was filled with a black ribbon or flickering candle. If, however, we count all the people who came out of their homes on August the 23rd, the chain was continuous, unbroken; there was enough of us not only to stand at arm’s length from each other, but shoulder to shoulder. There were so many of us that evening. (Viru Sõna, 29.08.1989) 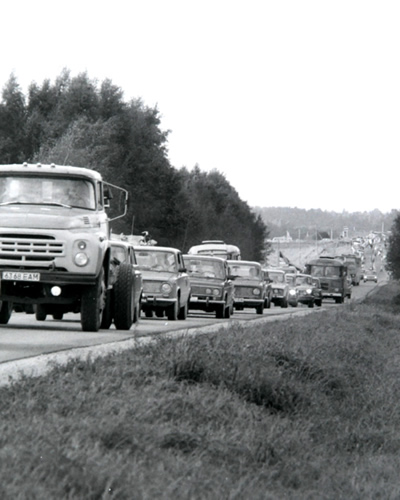 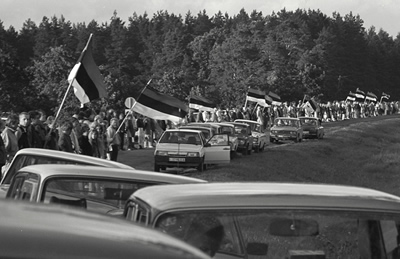